This past weekend, my wife and I took a little road trip to visit some old friends. It was 10 hours of driving each way, and instad of some rare and exotic locale, we were making our way though the plains of Oklahoma, Kansas, and Southern Nebraska to get to the fly-over city of Omaha.

While we were excited to visit friends, we were laughing about what we could possibly find to do in Middle America, but I have to admit: Omaha is a bustling, interesting city. There's plenty to do, plenty of shops, and no shortage of charm.

The real life of the city, it seem, is centered around the Old Market district. These brick streets are lined with a plethora of small, independant stores of almost endless variety. Antiques, boutique clothing, consignment, hand-made candy, iron works, you name it. There's also a burgeoning craft beer and microbrewery scene. In the old market alone, I think I counted four different microbreweries, and the bars and restaurants all praised their selections of craft and microbrews.

To be quite honest, while much smaller, Omaha had the feel of some kind of proto-Austin, and I think the culture of this city, while maybe fledgling yet, has the potential to become a true destination point for many looking for a quieter, slower-going getaway, without having to sacrifice ammenities and choice of activities.

There were two places in this Old Market district, in particular, I was absolutely smitten with. One was this sprawling, dusty, cluttered, filled-to-the-brim used bookstore, Jackson Street Booksellers. If you have ever read Stephen King's Dark Tower series, you would be instantly reminded of the stacks and towers and dust of the Manhattan Restaurant of the Mind. 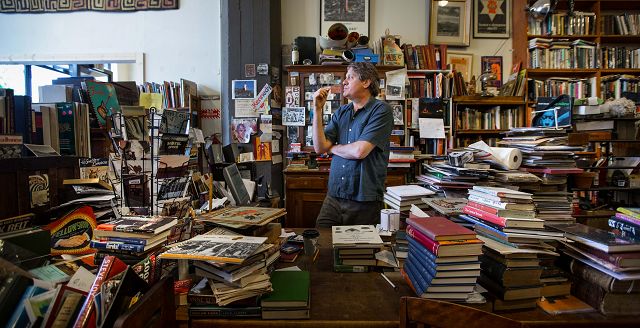 Every surface was covered in books, the floor was littered with stacks upon stacks. The back area was likewise covered in books, and the restroom was also filled with boxes of books. In fact, due to a finicky door, the shopowners invited you to grab a book and wait for rescue in the event you found yourself locked in.

This is the kind of store I could spend days browsing. They had so many books on so many different subjects, I feel fairly confident I could spend all of Warren Buffet's money there, much less my own.

The second place was a microbrewery and distillery called Borgata. They have a number of craft beers they brew, as well as an, as yet, very young whiskey. They have both an unaged white whiskey, which is interesting. Perhaps not good for sipping, but slightly sweet, a very subtle fruity flavor, and very smooth, so great for mixing. They also have a 6-month barrel aged whiskey, which loses some of that sweetness, but has picked up a lot of great flavor in the short 6 months it has aged. Despite how young it is, it's very smooth and retains that very subtle fruit flavor. I'm definitely excited to see where this whiskey will be when it hits 3 and 5 years. I'll be keeping an eye on it.

But, the brewery itself was gorgeous. Industrial building, exposed brick, some copper tiles, the two large copper stills sat in a glass room near the back. We also got to tour the brewery portion, where they explained their process, a little about beer making, and was an all around good time.

These were just two examples. Omaha also has the Henry Doorly Zoo and Aquarium, which was phenomenal. Potentially the best zoo I have ever been to. Really great exhibits, and the habitates were built in such a way that it looked, to my untrained eye, that the animals were well cared-for, and not stressed or anxious as you often see in zoos.

Anyway. Omaha! Who'd have guessed? It was truly an excellent city, and I would definitely go back to see some more and get a better feel for the city and its culture.