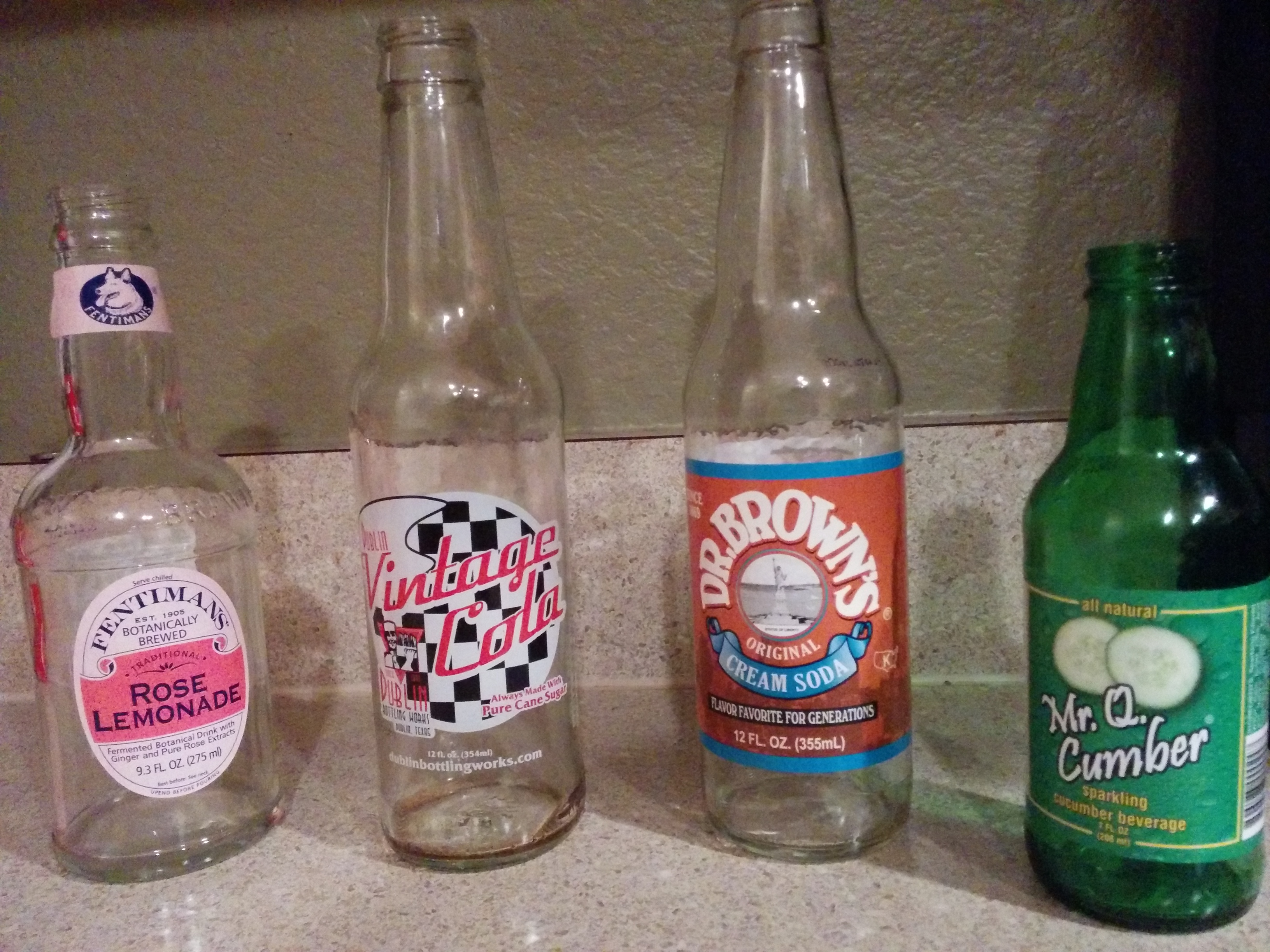 Well, I have to admit that I've come under the spell of yet another fascination. Usually these things aren't very long-lived; however, I think this one might stick around because it has the distinct advantage of being fun AND delicious.

Yes, as the title says, I've gotten into non-major brand sodas. Why? Well, why not? They're usually all-natural, and they're cane sugar instead of High-Fructose Corn Syrup, so while the health implications of that are debatable, it at least tastes a lot better. Why Soda? Well, I saw this video, and I had to look into it.

So, of late, I have been purchasing some craft sodas to try, and I thought I would record my thoughts on them.

Fentiman's Rose Lemonade is one of many from the Fentiman's Brand. It bills itself as "botanically brewed" and like most of their drinks is based on their classic fermented ginger mixture. The Fentiman's Brand has been around since the 1800s, and their time-honored traditions have made some of the most favored sodas today.

The Rose Lemonade is, as you might expect, lemon based, with a strong citrus flavor. The Rose oil offers a very aromatic note, but not a lot of flavor. So that leaves the lemon, the sugar, and the fermented ginger mixture. On first taste, I was a bit surprised. It wasn’t nearly as acidic as I had expected a lemonade to be. It wasn’t overly sweet, either, but a very light, refreshing citrus flavor with a bit of earthy spice from the ginger. And the rose oil made the whole thing smell amazing. The carbonation is nice, super small bubbles, which effervesce nicely. While this might not really be to my taste, it wasn’t bad. I’ll give it 3/5 stars.

Everybody knows the big colas: Coke, Pepsi, RC, but lately I had been wondering what else the cola world had to offer. In the video above, Mr. Nese spoke of Fentiman's Curiosity, and a few others, but I haven't been able to find those yet. So, when I saw Dublin's Vintage Cola, I knew I had to pick it up.

What makes the Dublin sodas especially intriguing is they're made right here in Texas. Dublin Bottling Works is a small soda bottling plant in Central Texas, who is committed to continuing to use real cane sugar. So being from Texas, I had a natural inclination to try these.

Initially on opening it, I noticed that it had a much stronger cola smell than either CocaCola or Pepsi. What I never knew about cola was how much spice it had in it. It's hard to describe exactly, but there's some definite aroma coming off this soda that you don't get from Coke or Pepsi.

What it has in aroma, it has double in flavor. Deep, rich flavors that aren't washed out by the sometimes over-bearing acidity of Coke and the overpowering sweetness of Pepsi. It was sweetened just right, and carbonated perfectly. The use of the real cane sugar puts Dublin Vintage Cola way ahead in my cola standings. I'll give this one a 4/5.

For a long time now, I have just assumed that I did not like cream soda. I'm not 100% sure why, but I suspect that at some point a long time ago I conflated club soda and cream soda, and they both became the bland, tasteless club soda. Oh, what I have been missing for all those years.

On a whim recently, I decided to try cream soda again at a soda fountain at a restaurant. I immediately fell in love with its creamy, vanilla flavors, light carbonation, and delightful sweetness.

So as I was searching for new sodas to try, I found Dr. Browns, and I had to give it a shot. Upon opening the bottle, I was immediately greeted with a strong vanilla smell. It wasn't that sort of chemically vanilla you sometimes get from vanilla flavored liquids either. It smelled like fresh, good vanilla beans, freshly scraped.

Tasting it, I was glad to find the aroma carried through into the flavor. Big, bright fresh vanilla flavor, without any unsavory aftertaste. The soda was very creamy as well, lightly carbonated so you really got to get that creamy feel instead of the harshness you sometimes get from fizzy drinks. Absolutely delicious, probably the best cream soda I've ever had.

Okay, so in the video above, Mr. Nese mentioned a cucumber soda that some kid went crazy for. I wasn't so sure about that, but I decided it sounded interesting enough to give it a shot. While searching for some of these sodas, I discovered Mr. Q Cumber Sparkling Cucumber Beverage, and I knew I had to give it a shot.

Having absolutely no idea what to expect from a cucumber soda, I will admit to being a little hesitant to try this one. But then Rachelskirts told me it was a favorite drink of one of the Gilmore Girls crew, I decided I should quit being a baby about it.

As expected, it smelled exactly like cucumbers. Which was initially a little off-putting, because cucumbers are delicious, but I wasn't so sure about liquid cucumbers. Especially liquid cucumbers with sugar and carbonation added. But, I gathered my courage and took a swig.

Immediately, I was met with a sweet, strong cucumber flavor, with all that mild spice that comes from cucumber. The drink was reasonably heavily carbonated, which only served to enhance the power of the flavors.

I have to admit, this might replace Cream Soda as an immediate favorite. A favorite, but admittedly one I don't think would be good all of the time. The flavors are strong, and very distinct, so it's one of those best enjoyed infrequently, when you need that extra refreshment.

I hope to make this a regular feature here, as I keep discovering new sodas. If you know of any others or you have any favorites, craft or major brand, let me know about them, and I'll try to give the a review.